Born in Detroit in the late fifties, I lived on the Eastside. While growing up in the Motor City, I loved to play games that relied on my imagination. I really enjoyed pretending to be a cowboy when I was very young. Westerns were big in those days, and I watched a lot of the Lone Ranger, Cheyenne, and Zoro. As I got a little older, I developed a fascination with space that bordered on obsession. The space race with the old Soviet Union was in full swing. I spent a lot of time pretending to be an astronaut. I enjoyed watching TV shows such as Lost in Space, Thunderbirds and Star Trek. All these televisions programs helped to fuel my budding creativity. Later, we migrated all the way over to the Westside of Detroit, where I spent my rebellious teenage years—it was a crazy and foggy time.

In high school, I found that I loved to write. I kept a notebook where I would experiment with small stories, a kind of doodling with words. Writing was a way to free my imagination and let it run wild. I thought books were the greatest invention ever made, and I still do. The first book that really affected me deeply was Flowers for Algernon. Later, I read the Hobbit and the Lord of the Rings both of which started my love affair with the fantasy genre. 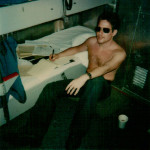 At twenty, I joined the service and was deployed aboard two aircraft carriers, the USS Enterprise and then later on the USS Coral Sea (Both of which are now decommissioned—man, do I feel old!). I voyaged to such wondrous places as the Philippines, South Korea, Singapore, Australia, and Hong Kong. I remember standing on the flight deck on a warm night, the sea breeze kissing my face, the Milky Way arcing above, and the dark waters of the Indian Ocean stretching out in all directions. It was an awesome experience and a great personal adventure. I read constantly and would write every night for hours as the ship rocked gently in the middle of the ocean. I was scribbling away on a book that could be considered a prequel to Flight of the Vessel.

I was determined to complete my college degree, so after leaving the service, I enrolled at Western Washington University  whereI studied English, Literature, and several writing styles such as novel, short story, and playwriting. Sometimes the landscapes of the Western half of Washington State reminded me a bit of the landscapes one would find in a fantasy novel. It was an inspiring place for sure.

In search of better job opportunities, I left the cool, rainy fantasy lands of Washington State for the hot, muggy countryside of central South Carolina to help my family in their small businesses. And then a few years later, I moved on to the rolling hills of Virginia to work for a small newspaper in the Shenandoah Valley as the director of technology responsible for technology strategies. I decided to start a family, and I now have two wonderful sons. Wanting to polish my management skills, I went back to school to study business, earning a masters from a local college. Now I had a degree for each half of my brain.

While working, I did manage to write a little here and there, but not as much as I would have liked, finishing a movie script and some poems. One day, I received a pair of headphones. So I put them on and began to write down some ideas for a new book that would carry on the story I wrote onboard ship…and thus began the Vision Dream Series.