BIRTH OF A SERIES 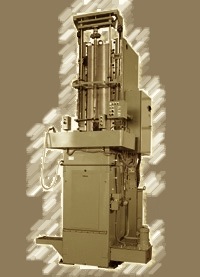 Out of high school, I did what a lot of kids from Detroit do…work in a factory. It was a small factory and I worked on a mind-numbing production machine called a broacher. It made two flat sides on the end of metal shaft, a shaft that would eventually end up in car brake system. It was tedious to distraction, but the pay was good. I sat before a large machine placing the shafts in a chuck holder so that two large blades could come down and score the ends. Next, I removed the broached part and repeated the process. Over and over again. Thousands of times a day. It was long (maybe ten minutes) before I could do this with my eyes closed. So, as I sat there hour-after-hour, my hands covered in the constant flow of yellow coolant (which ravaged my hands but protected the parts for scorching), I used to daydream. Daydream a lot. Sometimes about a girl. Sometimes about cars. But mostly about…a mystical place I called Palzin-Darus. Sitting on a shelf just in front of where I sat was a pan of the raw metal shafts. I would grab raw parts with first my right hand then my left hand, slap them, one-by-one into the broaching machine and have my finished parts to drop into another pan. One day, I noticed that by alternating left hand, right hand, that I had created a center mount of parts in the pan. Now, to most normal people, this fact would go unnoticed. Would be nothing more than a mound of raw parts to be smoothed out before continuing. But to my overly active imagination, it was a wonderful mountain range (what is now the Lower Apertine Mountains) in a fantastic and ancient world. And so off my muse went creating all types of stories based upon my mountain range of parts. These daydreams served as the foundation of my Vision Dream Series. Weird…but true.

I joined the US Navy in 1977 and became an Aviation Fire Control Technician (working on radar, laser ranging devices, computers, and so on) stationed at Whidbey Island Naval Air Station in Oak Harbor, WA. (an Island about 80 miles north of Seattle).

When I first arrived at Whidbey Island, I took a bus trip down to see the city Seattle, called the emerald city by many of its inhabitants. After seeing such sights as the Pike Place and the Space Needle, and escaping the clutches of the Church of Scientology devotees, I hoped onto a bus back to Whidbey Island. On that bus, I met a girl. I went to see her a week later in Bellingham, WA. During our visit, I started to tell her about my wish to someday write a book about my daydreams back at the factory. She grabbed a blank notebook and tossed it to me. And so began my work on this wonderful place I called Palzin-Darus at the time. I started by constructing a crude, hand-drawn map, and began to write a story about the line an early ancestor to my princess, Angelterra.