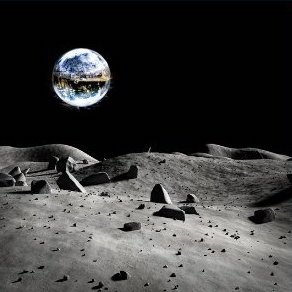 K2207c was at full planet and resembled a colossal blue and white marble against the onyx sky.
It looks so much like Earth, thought Emma, as she collected the final sample.
“I miss you, home.”
Hiss, Crackle.
“What was that last message?” asked Ship Command.
“Nothing. Just a little homesick that’s all.”
“Roger that,” was the reply. “You know, K2207c’s pretty oceans are near the boiling point half the year, Em. Not such a homey place. It’s safer here on the second moon.”
“Roger, Ship Command. Still…it is so beautiful.”
“Better hurry and bag and tag those rocks. I want you back safe on the ship.”
“Aye, Mike…Ship Command.”
“I switched off the recorder a while ago, Em. You can speak freely.”
“Thanks, Mike. Being homesick could get me canned from this mission.”
“I highly doubt that, Em. They’ll bump you up to major as soon as you take the reins at Ship Command when I leave.”
“I hope so, short-timer. You’re so lucky to be going back. To Earth that is.”
“A four-month sleep ride at extra-light speed isn’t my idea of being lucky, Em. Besides, I haven’t missed Earth much.” There was a long pause before he went on. “But what I will really miss is leaving here, leaving y—”
“Mike, don’t. It was nice for a time, but we weren’t meant to…meant to…you know what I mean.”
There was a second longer pause. Emma wished he hadn’t brought it up.
“I know, Em…who knows, maybe the Lawrence twins are still on EarthBase 7.”
“Fighter pilots. You watch your back with those girls. They can take you down in a heartbeat.”
“True, but what a way to go.”
Maybe he really will be fine after all, thought Emma. She looked up at the Earth-like world floating above the horizon, as she hopped along towards the next excavation site. Whenever she finally got her promotion and finished this next assignment, she was going to take a trip back home. Going to go see her mother again.
She can’t stay mad at me for leaving forever. Even if she doesn’t want to see me, I’m going home to try to work it….
Suddenly, she was tumbling towards the ground. She dropped her collector and tried to catch herself, but it was too late. For a moment, it seemed as if everything had stopped, frozen in time as she fell. Her head was spinning as the fall disoriented her. Then her bulky helmet smacked hard against a small boulder. From somewhere in the distance, she could just make out the accelerometer alarm blaring wildly.
“Em! Em! Are you all right?”
She needed to answer him, but it was becoming harder and harder to think. Above the buzzing alarm, she heard a loud hissing noise.
My helmet’s cracked.
She worked hard to focus her vision. There it was, a large crack down the front of her visor. Oxygen was leaking away as the moon’s toxic atmosphere was beginning to seep into her helmet. With her hand, she moved the tiny lever that increased her oxygen flow.
“Em! Em! Hold on! I’m on my way.”
“Mike?” she heard herself reply.
“Em! I’m in the airlock now. I’ll be there in a few moments.”
Why am I so clumsy?
She was regaining her senses a bit with more oxygen.
“Mike, my helmet’s cracked, and I’m leaking air.”
“How bad?”
She checked the Oxygen sensor. The rate she was losing oxygen was alarming. Even to her.
“The leak is fairly large. I’m not sure you’re going to be able to make it here in time.”
“Em, listen to me. Don’t move. I will make it to you in time. I promise.”
Emma tried to stand. A sharp pain shot up her right leg. She resisted the urge to scream out in agony.
“Oh, and I think I have broken my leg,” she said trying to keep the pain out of her voice.
“Does it hurt like hell when you move it?”
“Worse.”
“Does sound like a broken leg. You are still clumsy, Em.”
“Thanks, Mike.”
“Think of something else to keep your mind off the pain.”
She glanced up again at the shiny blue and swirly white sphere in the pitch-black sky.
Earth. How am I going to be able to last for the next two years here on this moon?
She started to wonder, too, who EarthFleet Command would send as Mike’s replacement. They still hadn’t made a choice yet, and Mike was leaving soon.
“You think they’ll send Thompson?” asked Emma, trying to push down the pain.
“Worried?” asked Mike with a chuckle.
“He’s not my favorite. Sometimes he can be a…”
“A jerk. A blowhard. A glory hound.”
“…Stickler for regulations,” finished Emma. She laughed at the thought of spending two years locked up on this moon with Thompson, when a sharp pain caught her breath.
“Ah!”
“Em, are you ok?”
“Just hurts when I laugh. I’m fine. But I need to shift a little.”
She started to move more onto her good side when a piece of the visor exploded. The lens shard ripped her face, and lodged in her cheek. The poisonous air came rushing in.
“Mike…” She tried to tell him her new predicament, but she couldn’t focus.
“Don’t worry, Em. Less than two more minutes away. I have the rover on full speed.”
The horrid air made her gasp as it began to burn her lungs. All her energy was being sapped away, and she could not move.
“Mike…my…visor…it’s gone…I can’t—”
“I won’t let you die! Damn it, you can’t die! Less than a minute! Hang on!”
Emma became lightheaded. She heard herself coughing and gasping hard, but it was like it was coming from someone else. Someone else was in trouble, not her. A feeling of peace descended upon her. She looked up at K2207c.
Earth…my lovely Earth.
“Em! Em! Em!”
I’m finally coming home now, Mommy. Mommy? Is that you? Mommy, I’ve come back to…