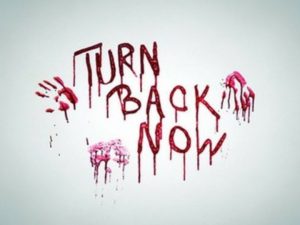 TURN BACK NOW
What kind of ridiculous request is this? And is that…paint? Red paint? No doubt from Sherman Williams.
As I stared at the words that looked like they were written in blood. With a bloody hand print to boot. And some other bloody blotches. I was unconvinced. This was nothing more than a poorly executed halloween-style prank. Sure, the letters were splattered upon the wall of the third-floor landing in this seldom-used, rickety old stairwell. And of course, it’s nearly pitch dark here most of the time with more than half the staircase lights burned out. Most lights…except this one which illuminated the third-floor landing. Where the old, shadeless incandescent bulb lit up this strange blood-soaked plea like a movie poster from a B-rated horror film. I touched the dried red substance. It didn’t really feel like paint. It felt more like…
No, it couldn’t be…
I noticed that there were fingerprints on the tips of the bloody hands. If they were the victim’s, identification would be swift. If they were the perpetrator’s, those prints might be his undoing. I decided to use my shirt to gently rub clean the spot I touched. No use complicating the investigation with random prints from a bystander…innocent bystander. I put my hand just above the handprints to measure.
About 6 foot.
I’m only 5 foot 8 inches, so it couldn’t possibly be me. And the fingers of the handprints were long and slender. Like the fingers of a woman’s hand. A six-foot tall woman’s hand. Perhaps a model.

TURN BACK NOW
This must be a joke. It just didn’t make sense.
If it were an actual message from an unfortunate victim, wouldn’t the memo of this mural read something like: Please help me! Call the Police! Inform my priest! Not such a cryptic message as TURN BACK NOW. Why would this poor victim care about my safety while she was being dragged away, covered in her own blood, after being stabbed savagely and repeatedly with a dull steak knife? And if this were from that cruel perpetrator himself, would he really want to warn me off? Or would he wish me to stay on to capture me, so he could further indulge in his gruesome pastime?

TURN BACK NOW
I should call the police and report this. But it’s not my job. I’m no cop. I’m no hero. What if it’s just a prank? I would look like an idiot.
I pulled out my phone and pressed 9…then paused. I wondered if I was really going to do this. I suppose someone had to, so I pressed 1. I took a deep breath. Then finally, I pressed 1 again.
“Hello? Yes. I wish to report…to report…Wait, I am trying to figure out how to say this. No, this is not a prank. Ok, Ok, here I go: I wish to report a possible murder…message. Yes, message. On the wall. Written in blood. What does it say? It says: TURN BACK NOW. No, I wasn’t doing a spooky sound effect. It really says that. In blood. And there are handprints. No, I don’t know whose handprints! That’s for you guys to find out. No. No, I am sure…well, pretty sure, that it’s not just paint. 24332 Bryer Avenue. In the old fire stairwell on the bad side of the building. Third-floor landing. I’ll stay for a while. If you hurry. That is my name. How did you know it? Whew, Caller ID. Ok, I’ll be waiting.”

TURN BACK NOW
What if they think I’m involved? They couldn’t possibly think that. I’m the one who reported it. Maybe they think it’s all a joke.
I waited. I paced. Waited some more. I sat on the stairs forever and still no detective, no patrolman, not even a K-9. A siren wailed in the distance, but it was getting softer and softer. I finally gave up the ghost. I trudged up the next two flights of stairs. Unlocked the hall door with the big key and shuffled down the dimly lit hall towards my apartment. Apartment 551. I used my small key to open my front door. I found the remote in the couch cushion and pressed on my TV, hoping to escape that potentially murderous scene on the third-floor landing.

…Detective Martin says the suspect has a history of brutally stabbing several women in deserted fire escape stairwells of old apartment buildings. He believes the man might be posing as the superintendent or a custodian. And they…

I clicked off my TV. Apparently the TV knew all about my predicament. The microwave bingged. And my day-old pizza slice was burning hot. It seared the roof of my mouth before I realized it. Setting it down to cool, I noticed how the tomato sauce stained the plate just like the wall on the third-floor landing. Finally, I laid in my bed and, being extremely exhausted, I slept the sleep of the dead.

TURN BACK NOW
A bad dream. It probably never happened.
Cheerfully, I locked my apartment door behind me and headed down the hall. A new day. A great day to be alive. I nearly danced down the first flight of stairs, but when I hit the second flight, I heard…someone. Someone softly muttering. The police are finally here, I thought. I hesitated. Unsure if I should get involved. There’s a staircase on the other side of the building. The clean, well-used side of the building. No, I refused to be goaded into turning back. Now or ever. I started down. Rounding the corner, I saw someone scrubbing the wall with a giant sponge. Then he spotted me watching from the top of the stairs.
“A joke. Someone thinks this is a joke. Called the police last night. Woke me out of bed. And for what? For this? Murder. Who would think this was a real murder?”
He looked right at me suspiciously.
“I…I don’t…that sure is weird, isn’t it?”
He grunted and went back to his scrubbing. I didn’t recognize him. The building super was a squatty man, who always wore a light brown shirt and dark brown pants. Always. Like a UPS man with a thousand keys. But this tall, gaunt man had on undertaker-black pants and a mortician’s style white shirt and a loose necktie. Not what you’d expect for a custodian’s uniform. A long, scabbed-over scratch mark marred his right cheek. From under his rolled up sleeve, a scythe tattoo peeked out at me. And his oversized hands stained red from his work.
“Well, hope you find out who did it. The graffiti, I mean,” I told him. Then, I started down the next flight of stairs when I heard the man call out.
“Hey! Hey, you.”
“Yes?”
“I wouldn’t go down that way. It’s locked up tight on account of this misfortunate incident. If I were you I would turn back now. If you follow me, I’ll show you a very special way.”