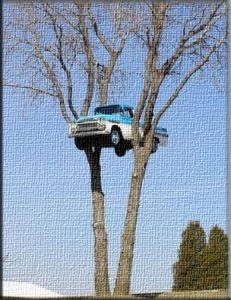 Normally, she would have thought the scene before her hilarious. An antique pickup truck lodged high up in a tree. It looked just like the one her father had tried to restore so many years ago. But instead of laughing, she broke down and sobbed, while she gripped tightly on her daughter’s tiny, warm hand. Behind her was the sound of booming radio chatter as medics from the dozen or so emergency vehicles, doors opened wide, loaded up the dead from her devastated neighborhood. Survivors stumbled around in a daze saying to each other: “At first, I thought it was a tornado, but it was different.” and “It happened so fast.” and “I heard a Boom! Then everything was gone.”
Every home lay in a heap of splintered boards, mangled siding, or crushed bricks. A turkey buzzard stood atop a heavily leaning light post, watching, waiting. The bright morning sun gave little warmth, little comfort.
“Why, Honey? Why?”
She glanced down at her little daughter, still dressed in her princess pajamas and a pink robe. Unblinking yellow eyes stared back at her.
“They don’t like me. So, I wanted to play Harry Potter with them. Then they would like me. Won’t they, Momma?”

Emma opened her eyes. She found herself staring up at the ceiling lights of the infirmary. Something stiff and foreign covered the left side of her face. Next to her, the surgibot sat motionlessly. Its four spider-like arms tucked away neatly in their locked position, like a resting bug. She touched the vinyl-like patch that coved half her face and eye.
My eye!
She realized something was different, wrong with her left eye. It didn’t feel like it was hers.
“Em, don’t touch it. Your body is still adjusting to it,” said a familiar voice.
“Mike?”
Her companion and commanding officer for the past two years appeared at her bedside. He gently tapped around the edges of the patch. He nodded his head as if satisfied with it.
“You scared me to death, Em.”
“You brought me here? After the fall?”
“Yes. And I…we had to….”
“Why is the surgibot out?”
“About that. You were hurt so badly. The atmosphere, your visor damaged…they damaged…”
“My eye?”
“I am sorry, Em. I did all I could.”
“The surgibot repaired it, right, Mike?
Mike did not reply. He just kept staring at the floor.
“Mike? Right?”
“Sort of.”
“What do you mean ‘sort of’?”
“Your eye was too far gone. I…it…I ok’d it to—”
“You let it take my eye!”
“You have a bionic replacement now. It’s better than a real eye.”
I have no eye!
She tried to stand up, but she couldn’t move. Braces held her to the operating bed.
“Why can’t I get up? Get it to release the clamp.”
“Surgibot is running one last scan before it can release you, Em. It’s checking for rejection. Try to relax for a little while longer.”
“Relax? But I don’t have an eye.”
“Yes, you do! It’s just…different.”
“It’s a piece of machinery. It’s not me.”
“After the scan you’ll see. We’ll test it. Together. Now sit back and wait.”
Emma took in a deep breath and exhaled slowly. It was a trick her mother had shown her when she was a little girl.
“How long?”
“Ten minutes tops. Try to think about something else.
The pickup truck popped into her mind.
“You wouldn’t believe the creepy dream I had while I was out.”
“Really?”
“Yes. There was this pickup truck stuck in a tree and this…”
“Wait, what kind of a pickup truck?” asked Mike chuckling.
I don’t know. Blue and white. Gas powered, I think.”
“Gas powered? That’s one old truck, Em.”
“You’re stressing me out, Mike. Just let me finish the story.”
“Ok, Ok. I’ll check on the scan. You finish. Pickup truck. In a tree. Go…”
“I was standing there gazing up at that truck, holding the hand of this little girl who was supposed to be my—”
“I don’t believe it, Em! I don’t! Impossible!”
“What is it, Mike?”
“It can’t be true.”
“Just tell me. It is about my eye? Am I rejecting it?”
“Em, you’re…you’re pregnant.”
“It’s just been us for two years. And we haven’t since…Mike, what did you do?”
“Nothing! This is not me. Not mine. It can’t be.”
“Scan me again.”
He pressed some buttons, and she heard the rhythmic buzzing of the scanner once more.
“Wait, this can’t be right.”
“I’m I still showing pregnant?”
“Yes, It’s…it’s—”
Emma remembered the haunting yellow eyes of her dream daughter looking up at her.
“…Not human,” she finished.
“We’re jumping to wild conclusions. I’ll run a diagnostic on the scanner.”
She had to get up, but she was still locked tightly to the bed.
“Get me out of this! Get me out of this right now!” she screamed.
Emma felt herself thrashing about. Her face and hands felt hot.
Do I have a fever? Am I dying? I have to get out of here!
“Stop, Em! Your having one of your panic attacks. I’ll give you something for it.”
She felt a sharp prick on her upper arm. Immediately, she began to relax. Her vision became cloudy. She saw Mike doing something with the controls. He was smiling at her. He was saying something, but she couldn’t understand him. Then, in the shadows, something caught her attention. It was tall. It was standing behind Mike. It reached for Mike. Emma wanted to warn him, but her mouth refused to work. It grabbed Mike around the throat. She managed to reach her hand out to it. It looked at her…with haunting yellow eyes.